In a Stupid Mood

Posted by The Sunday Morning Hangover at 9:40 PM No comments: 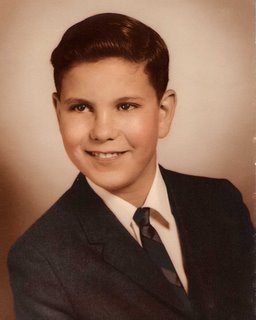 So I took this online test , which takes about 15 minutes and is really a scam to get your email address so that they can sell you stuff.
Here is the link:
http://web.tickle.com/tests/uiq/index-pop.jsp?sid=1685&supp=text&z=
And now I get to gloat about the results!

Congratulations, Marc!
Your IQ score is 127

This number is based on a scientific formula that compares how many questions you answered correctly on the Classic IQ Test relative to others.

Your Intellectual Type is Word Warrior. This means you have exceptional verbal skills. You can easily make sense of complex issues and take an unusually creative approach to solving problems. Your strengths also make you a visionary. Even without trying you're able to come up with lots of new and creative ideas. And that's just a small part of what we know about you from your test results.
Posted by The Sunday Morning Hangover at 10:30 AM 1 comment:

Posted by The Sunday Morning Hangover at 11:04 PM No comments:

...and ONE MORE Shatner video

Posted by The Sunday Morning Hangover at 8:03 AM No comments:

Posted by The Sunday Morning Hangover at 7:44 AM 1 comment:

Posted by The Sunday Morning Hangover at 8:51 PM 2 comments:

27 Members of Congress Can't Be Wrong: It IS Time To Impeach 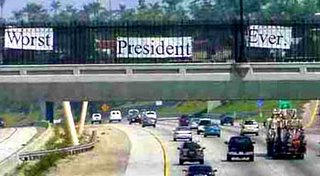 You Too Can Send this letter to your representative--go to http://capwiz.com/pdamerica/issues/alert/?alertid=8329176&type=CO

The Honorable Peter A. DeFazio
House of Representatives
2134 Rayburn House Office Building
Washington, DC 20515 3704
Re: It is time to Impeach
Dear Representative DeFazio:
Please co sponsor and support H.Res.635, which will create a select committee to investigate the Administration's intent to go to war before congressional authorization, manipulation of pre war intelligence, encouraging and countenancing torture, and retaliating against critics, and to make recommendations regarding grounds for possible impeachment.
And please co sponsor and support H.Res.636 and H.Res.637 to censure, respectively, President Bush and Vice President Cheney for failing to respond to requests for information concerning allegations that they and others in the Administration misled Congress and the American people regarding the decision to go to war in Iraq, misstated and manipulated intelligence information regarding the justification for the war, countenanced torture and cruel, inhuman, and degrading treatment of persons in Iraq, and permitted inappropriate retaliation against critics of the Administration, for failing to adequately account for certain misstatements they made regarding the war, and in the case of President Bush for failing to comply with Executive Order 12958.
You can find an extensive report produced by the House Judiciary Committee Democratic staff at http://www.house.gov/judiciary_democrats/iraqrept.html
Sincerely,
Marc Gunther
Radio Host
Posted by The Sunday Morning Hangover at 2:00 AM No comments: 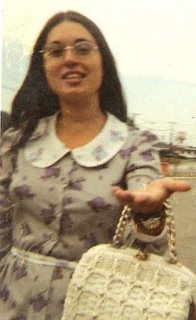 I don't use this blog as a diary and I rarely talk about personal stuff--but here I am alone on a Saturday night sitting here crying and I feel stupid. I am crying about an old girlfriend.
But she wasn't just an old girlfriend-she was the first major love of my life when I was in my teens,initally a good friend who was my steady girl for a few years till she introduced me to my first shack-up lover Heather(who ended up marrying my good friend Armin.)
Jody was absolutely crazy--vivacious,neurotic, full of laughs and pranks-and real hip and smart. This picture doesn't really capture her, cuz she's wearing a deliberately square dress that she hated so much that she loved it.
But for some reason this picture is how I remember her.
She was the girlfriend who made me wear wire rim glasses because my horn rim glasses were so uncool-went with me to buy blue jeans which my folks hated.Together we listened to Smiley Smile, The Bonzo Dog Band , Harry Nilsson and Randy Newman.She went to rock concerts with me and Gary M and drove the two of us nuts.
So why at the age of 49 did this organic health food freak and natural foods store owner,why oh why did she get a badass case of lung cancer?
She was diagnosed in November and it advanced so quickly that now it is spreading to other areas. I called her in her hospital room today and she was so doped up on morphine and pain killers that she didn't know what time it was and couldn't talk.

Jody,I will always cherish the fun times we had in our youth and I hope that someday in an afterlife we can do it again.
Posted by The Sunday Morning Hangover at 7:34 PM 2 comments:

Was Dick Cheney covering up an affair? 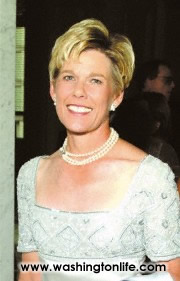 Was a drunken Dick fooling around on the ill fated hunting trip?
NY Post:"Vice President Cheney appears to have dodged the buckshot of gossip-hunters. Radio host Alex Bennett yesterday floated the rumor that Cheney delayed reporting his shooting accident Saturday in an effort to "hide or spin" the presence of Pamela Willeford, ambassador to Switzerland. Huffingtonpost blogger Bob Cesca wrote, "The rumor goes that Lynne Cheney isn't happy with Cheney's close relationship with Willeford." Trouble is, the Dallas Morning News reports that the ambassador's husband, Dr. George Willeford III, was also in the hunting party, but shooting in a different field, about a mile away."
Want to play a GAME? Go quail hunting with Dick HERE.
Posted by The Sunday Morning Hangover at 8:34 PM No comments: 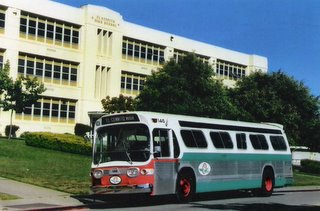 North of Berkeley California,El Cerrito was the home of Creedence Clearwater Revival. Thanks to Walt for giving me this pic of the school that I used to go by on the way to Nervo's house.He says they have recently torn it down.
Posted by The Sunday Morning Hangover at 8:55 AM No comments: 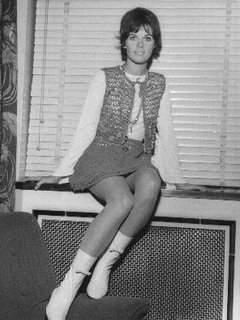 The Starlet and the Skier -Court TV 10PM
On March 21, 1976, handsome US Olympic skier Spider Sabitch was at the Aspen chalet he shared with his girlfriend, actress Claudine Longet. He was getting ready to go out for the evening -- apparently to see another woman – when suddenly he was shot in the stomach. Sabitch bled to death before reaching the hospital. Longet claimed that the gun went off accidentally in her hand and a jury eventually believed her story. Dominick Dunne has the inside story of this infamous case. TV-14

In March I will be featuring Claudne Longet as part of my "Women In Music" month.
Posted by The Sunday Morning Hangover at 8:44 PM No comments: 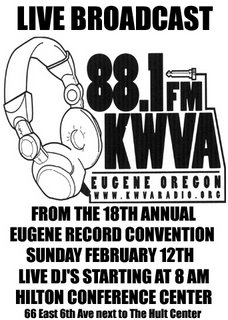 Amassing the Music
The Eugene Record Convention provides a place to buy, sell, trade and appraise records and CDs

On Sunday, Eugene will host the 18th annual Eugene Record Convention, which draws vendors and record collectors from all over the world. Convention attendees will be able to buy, sell and trade records, CDs and other music memorabilia. Attendees can also get records appraised at the convention.

Bill Finneran has been a part of the Eugene Record Convention since its inception in 1988. A friend of Finneran’s noted that unlike Seattle and Portland, Eugene didn’t have a record convention.

There will be around 100 vendor tables at the convention, and Finneran estimates that there will be more than 150,000 records at the show.

“You can’t go through them all in one day,” Finneran said. “Although some people try, we have a lot of people who get there right when it opens and they are still there when (the vendors) are packing up their stuff.”

Records range in prices. There may be some obscurities at the show, but many of the records will be less than $20.

Finneran said the convention will be filled with music lovers with a wide variety of tastes.

“It’s like heaven for anyone into vinyl,” Time said. “Right around noon or 1 p.m. it turns into a frenzy; it’s kind of like a circus. It gets really, really crowded and really, really exciting for a while.”

He added that “a lot of the bargains are to be had later in the day.”

This year, for the first time, KWVA will broadcast live from the convention on 88.1 FM. Those who want a preview of the show can catch The Sunday Morning Hangover, which will begin its broadcast at 8 a.m. on Sunday. The convention doors open at 10 a.m.

Both Finneran and Time have been record collectors for years. Finneran’s collection of musical memorabilia includes more than 20,000 pieces.

Finneran says that audiophiles prefer vinyl’s analog recording because of its fuller sound when compared to CDs, a digital format.

“Digital sound has improved vastly since the early days of CDs, but there is still a notable difference,” Finneran said. “Obviously we don’t talk in digital, we don’t hear in digital, when you go to see a band you aren’t listening to digital guitars.”

Finneran said that some collectors just collect records for the cover art.

“Usually the artist on the record is some geek who is so ugly they don’t want to put his picture on the cover, so they put a beautiful girl on the cover instead,” he said.

“Springfield has the number one Christian ventriloquist artist, a lady named Marcy Tigner,” said Time. “Marcy Tigner has put out 40 records on her own.”

The Eugene Record Convention will run from 10 a.m. to 5 p.m. Sunday at the Eugene Hilton hotel, located at 66 E. Sixth Ave. Tickets are $3 for adults, children younger than 12 get in free.
Posted by The Sunday Morning Hangover at 8:11 AM No comments: 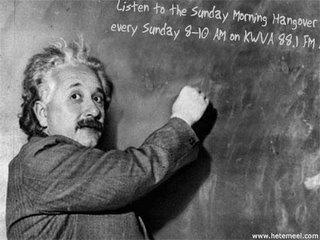 Another link to listen to my broadcasts , thanks Shawn from Entroporium!
http://feeds.feedburner.com/TheSundayMorningHangover
Posted by The Sunday Morning Hangover at 8:18 PM No comments:

My Radio Show is Available on Ipod! 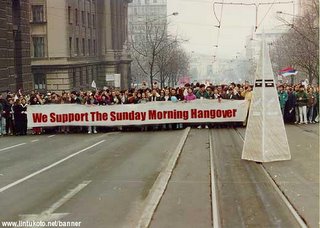 Go To the I tunes page,go to Advanced --> Subscribe to podcast
and paste in http://www.entroporium.com/SundayMorningHangover.xml
Thanks to Shawn from Entroporium and Armin from True Margrit for making this happen!
Posted by The Sunday Morning Hangover at 8:45 PM 3 comments:

This Sunday's Show on KWVA

General Marc Time and Sargeant Peter Herley go to WAR against commercial radio!!!
This show will exhibit more testosterone than the Super Bowl and IS FOR MEN ONLY!!!
NO GIRLS ALLOWED! 8-10AM KWVA-FM 88.1- listen at www.kwvaradio.org
This show is available for download at http://ahammer.com/marctime/
Posted by The Sunday Morning Hangover at 8:49 PM No comments:

Where he rips off the Shatner "Rocket Man" video.

Posted by The Sunday Morning Hangover at 9:21 PM No comments:

Where Beck stole the middle of his "Where It's At" video.

Posted by The Sunday Morning Hangover at 9:19 PM No comments:

Posted by The Sunday Morning Hangover at 9:16 PM No comments: 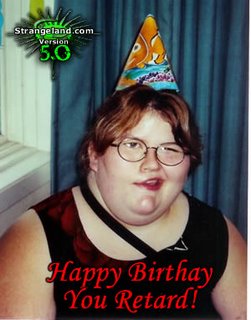 But on a serious note, we all are praying that you can get some help and let us know that you are O.K.
WE MISS YOU
Posted by The Sunday Morning Hangover at 8:11 AM No comments: