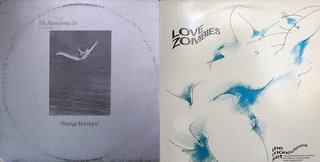 Blog Of The Week is Lellebelle from the netherlands. This week they have a link to one of my fave new wave releases, the first 2 Monochome Set Lps.
If you haven’t downloaded RAR files yet , you need a Winrar or a similar program to unzip the files.
Go to this rapidshare link for the download, use the free option, wait 30 seconds to enter the key code that appears and then save to your desktop or music folder.. What you get is a zipped rar file that has to be unlocked with a rar converter. Unzip the file and it turns into MP3 files. Enjoy..
Posted by The Sunday Morning Hangover at 8:10 AM No comments: 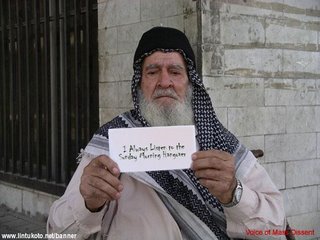 Saturday 9 to 11 AM I hosted the Texas Chainsaw Acoustic Show, and Sunday the usual Hangover at 8 AM. You can Listen to these programs HERE
Posted by The Sunday Morning Hangover at 6:34 AM No comments: 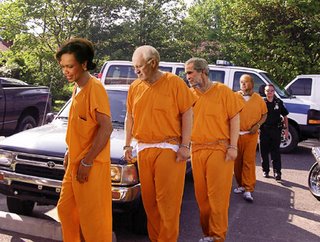 I few weeks ago I heard from TruthOut.org that Bush's brain Karl Rove was about to be indicted in the Plame affair.
What happened? Bush has his swagger back, polls are up and Rove is back in charge.
The Dems better get it together.
Posted by The Sunday Morning Hangover at 9:26 PM No comments: 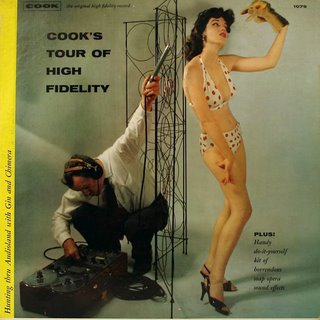 My Favorite new music blog is http://www.checkthecoolwax.blogspot.com/.
On tomorrow's show I will be playing some choice trax from this wacky and well thought out weblog.
Oh incidentally, last weeks Hangover show is ready for you to download HERE.
Posted by The Sunday Morning Hangover at 2:10 PM No comments: 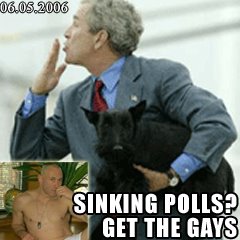 I don't care if you are homosexual-but when you spend your time introducing constitutional amendments banning gay marriage you should expect the fringe press to start examining your past.
Here are three links to this emerging story:
http://www.therandirhodesshow.com/live/
http://www.waynemadsenreport.com/
http://bushssecretlifein84.tripod.com/
excerpts:
"George W. Bush's marital problems have just taken another turn for the worse. Apparently, Mr. Bush has not only engaged in an extra-marital affair with a member of the opposite sex who is also a senior member of his Cabinet, but also a member of the same sex. WMR received the following release this morning from Leola McConnell, Democratic candidate for Governor of Nevada (who has been endorsed by WMR). McConnell is a one-time professional dominatrix."

"President Bush's speech to the nation Monday. If he doesn't say he's a gay American or at the least a bisexual one then he shouldn't be making one at all. And the notion that it would be in regards to writing bigotry into our nation's Constitution is reprehensible. Too bad it isn't me doing the rebuttal because in 1984, I watched him perform (with the enthusiasm of homosexual male who had done this many times before) a homosexual act on another man, namely Victor Ashe. Victor Ashe is the current Abassador to the nation of Poland who should also come out like former Governor McGreevey of New Jersey and admit to being a gay American."
Here is more evidence that Bush is Gay.
Posted by The Sunday Morning Hangover at 8:03 AM No comments: 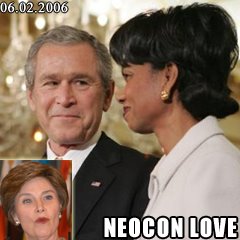 Thanks to Randi Rhodes site for this image
http://www.waynemadsenreport.com/

June 2, 2006 -- A White House source, speaking on background, vehemently denied to WMR that there are marital problems between President Bush and First Lady Laura Bush over a reported extramarital affair between Mr. Bush and Secretary of State Condoleezza Rice. However, two mainstream media sources have confirmed that their sources also have reported an ongoing affair between Mr. Bush and Rice.
Informed sources Inside the Beltway report that First Lady Laura Bush has established temporary residence in the Mayflower Hotel in Washington, DC as a result of a tiff with President Bush over an extramarital relationship involving her husband. Mr. Bush's tryst is said to involve Secretary of State Condoleezza Rice. It is not known how long Mrs. Bush plans to remain at the Mayflower, however, her security detail has been present at the hotel during hours when the First Lady would normally be residing in the White House. While she was National Security Adviser, Rice, who has never been married, referred to George W. Bush as "my husband" before she corrected herself and said, "President. Bush" Rice was speaking at a dinner hosted by New York Times bureau chief Philip Taubman when she made her "husband" remarks. 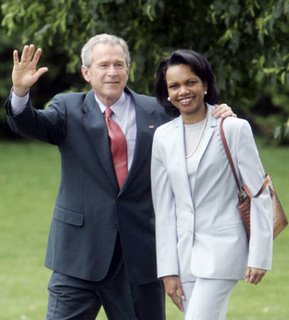 Posted by The Sunday Morning Hangover at 9:21 PM No comments: