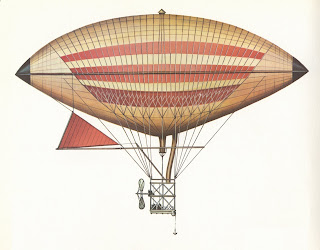 "A few months ago now–I don’t recall how many–this project began. At first, it was the offer of an hour of Saturday morning air time from a local AM station. To do what with? I already had a talk show with compatriot, James Stegall. I had started writing comic bits to perform, feeling the talk format stultifying and tired. When OPT waved a handful of cash at us, my first thought was to cobble together my comic interests with an interview show, and see what happened. To that end, I wrote seven scripts (”The James & Dudley Show” Hated it. ). Then circumstances prevailed that caused this idea to be tossed aside; I needed a new direction.

After a lengthy call for voice actors on Craigslist, our number shook down to 7. One of these actors, Mark Lewis, at one of our meetings in our Eugene annex (a bar), suggested the show should be set aboard an airship–a giant dirigible the length of a football field. I jumped right on it–amazingly, I had been playing with a book idea about an eccentric multi-millionaire who builds a giant airship. Thus was Airship Radio Theatre begun.

Well, not really. Concepts are fine, and fairly commonplace. Next, I had to write the scripts.

A long-time desire of mine has been to write for radio. I never pursued it seriously, since radio drama is a tiny niche (but still larger than I suspected). Here was my opportunity. Now…could I do it?

Then we needed a guest.

Composer of “Classical Gas,” Mason Williams, agreed to be that person–our first guest. One show became three–all of them featuring “Classical Gas,” MW, and sketches (written by MW) by the Smothers Brothers (as well as our own brand of sketch comedy).

How to record it? OPT offered us recording time, but we could never fit into their schedule. We borrowed a mic from them, but had no cable, stand, or way to make the computer hear it (mics generate an analog signal), so gave it back (later, they bought us three mics and cables–but what they bought we considered too low end). Enter Mark Lewis again. This time with two beautiful USB mics. We began recording around our diningroom table. I hung a quilt over the archway leading into the livingroom. We were loud and unruly and kept wife and son awake. But it worked.

Now I’m going to build a studio, a simple affair, out in our garage. A table, lights, chairs, thick curtains, a borrowed computer, USB mics… Many summer night I suspect will be spent out there. This will result in parties. And, of course, there will be actors at these parties. And writers. And an inventor. Just like in olden times.

Now we’re talking about how to do the show live, before a recorded audience. I mean, record before a live audience.

Free-Speech Case Divides Bush and Religious Right
By LINDA GREENHOUSE N.Y.Times
Published: March 18, 2007
WASHINGTON, March 17 — A Supreme Court case about the free-speech rights of high school students, to be argued on Monday, has opened an unexpected fissure between the Bush administration and its usual allies on the religious right.
As a result, an appeal that asks the justices to decide whether school officials can squelch or punish student advocacy of illegal drugs has taken on an added dimension as a window on an active front in the culture wars, one that has escaped the notice of most people outside the fray. And as the stakes have grown higher, a case thatonce looked like an easy victory for the government side may prove to be a much closer call.
On the surface, Joseph Frederick’s dispute with his principal, Deborah Morse, at the Juneau-Douglas High School in Alaska five years ago appeared to have little if anything to do with religion — or perhaps with much of anything beyond a bored senior’s attitude and a harried administrator’s impatience.
As the Olympic torch was carried through the streets of Juneau on its way to the 2002 winter games in Salt Lake City, students were allowed to leave the school grounds to watch. The school band and cheerleaders performed. With television cameras focused on the scene, Mr. Frederick and some friends unfurled a 14-foot-long banner with the inscription: “Bong Hits 4 Jesus.”Mr. Frederick later testified that he designed the banner, using a slogan he had seen on a snowboard, “to be meaningless and funny, in order to get on television.” Ms. Morse found no humor but plenty of meaning in the sign, recognizing “bong hits” as a slang reference to using marijuana. She demanded that he take the banner down. When he refused, she tore it down, ordered him to her office, and gave him a 10-day suspension.
Mr. Fredericks’s ensuing lawsuit and the free-speech court battle that resulted, in which he has prevailed so far, is one that, classically, pits official authority against student dissent.
Read the rest HERE
Posted by The Sunday Morning Hangover at 7:00 AM 1 comment:

Posted by The Sunday Morning Hangover at 7:32 AM 1 comment: 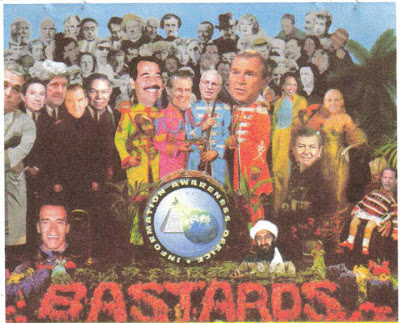 ..That Sgt.Pepper taught his band to play!
This week's show is already in the can and it will be great! It has
been 40 years since the Beatles put the finishing touches on Sgt
Pepper's Lonely Hearts Club Band and Sunday I will be featuring a 2
hour special about the making of that groundbreaking album with
interviews, outtakes, backing tracks and mono alternate mixes of the
album that ushered in the Summer of Love.
This Sunday morning at 10 AM on the Sunday Morning Hangover !
Available streaming at www.kwvaradio.org and in Eugene at 88.1 FM.
Don't forget to set your timer forward one hour due to the Spring
Forward!!!
Posted by The Sunday Morning Hangover at 9:14 PM No comments: 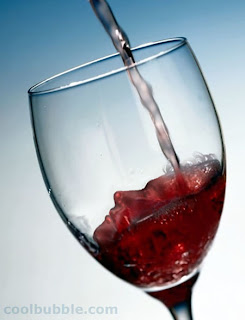 Water Vs. Wine
It has been scientifically proven that if we drink 1 liter of water each day, at the end of the year we would have absorbed more than 1 kilo of Escherichia coli (E. coli) bacteria found in feces.In other words, we are consuming 1 kilo of Poo. However, we do not run that risk when drinking wine (or rum, whiskey, beer or other liquor)
because alcohol has to go through a purification process of boiling,
filtering and/or fermenting.
WATER = Poo WINE = HEALTH
Ergo: It is better to drink wine and talk stupid than to drink water and be full of crap.
Thanks to Cat Tails...to Cocktails for this information.
Posted by The Sunday Morning Hangover at 7:29 AM No comments: