Is this Gunther or Rudy? 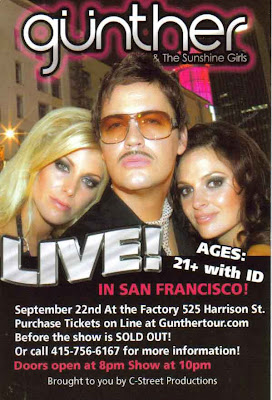 Posted by The Sunday Morning Hangover at 7:38 AM No comments: 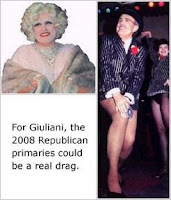 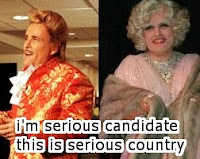 Posted by The Sunday Morning Hangover at 8:15 AM 2 comments:

Thanks to Shakesville for this gross clip of our future president.

Posted by The Sunday Morning Hangover at 8:07 AM No comments:

Tasered for Being an Asshole

Did you see the video of a Florida student being dragged out of a Kerry speech and tasered? He had a right to ask those questions, but he wouldn't leave the podium and the security and crowd turned against him .
I agree that the untrained campus security police were way too heavy handed.They could've handled thiswithout tasers-but he really was being an asshole, and many You Tubers agree:

"When i saw this on the TODAY show i was pissed at the cops but now i see the whole story, they cops had every right to do that."
"Freedom of speech my ass. That was pathetic. America is officialy a fascist regimn."
"They didn't arrest and taser him for voicing his opinion. They were going to escort him out of the room, but he had to keep making a scene. He was acting crazy and they clearly warned him that they would taser him, but he kept acting like an ass!"
"Obviously this person has a lack of respect for authority as well as control issues. Not only do I think the police were completely in line by using a taser, I also think that someone this volatile may need to be evaluated to see if they pose a risk to other students on campus."
"He should have asked the one question .. BUT, in no way did he deserve tthe treatment he got. Shame on Kerry for not standing up for this kid. Kerry just mumbles on as they were manhandling him. Disgraceful. That kid asked some important questions that Kerry needs to answer."
"well at least he can say he got his fifteen minutes of fame, by the way was this a public or private function?"
"If 10 people from the audience had stood up to help the guy"
"In case you didn't notice, they were cheering when he was escorted away from the microphone because he was being a jerk. Then he hyped the incident to try to get sympathy and it looks like he was successful. You are being played for a fool."
"In NYC, if you resist being handcuffed by officers for a few minutes, you better hope you only get tasered....maybe a few blows to his head with a night stick would of been better way to subdue him."

By the Way, EVERYTHING this butthead said was TRUE, and I laughed when he asked the Skull and Bones question.
Also he gave a false name at the beginning of his rant.
I heard today that this student was Andrew Meyer, a U Florida student in the College of Journalism and Communications,and was a known prankster and provocateur.
They should've asked the crowd if they wanted him off the podium.

What do YOU think after watching the video?
Watch the video here:

Posted by The Sunday Morning Hangover at 8:16 PM No comments:

In Defense Of Britney

By now you've seen the footage of Britney Spears at the MTV Awards. A lot of people are laughing, saying she can't lip sync, can't dance and is too fat. But most of the comments are overly mean spirited.
As much as I like to make fun of rich overpaid drug addled celebrities like Britney,I think that it has become a major league sport to dwell on the failures of our bloated "stars". All too frequently it's the blonde young females that are the easy targets. Yeah , I'm no fun anymore. I guess you are officially considered an old fart when you prefer to monitor the criminals running our government rather than the bread and circus.
But even tho' Brit looked like a deer in headlights and shook like a bowl of Jello I think it took BIG BALLS for her to try to stay in the public eye after being
seen totally wasted in public for the last few years. And I'd like to see any of you reading this get up in front of the world half naked and try to sing, dance and remember words and moves to stupid songs.
It wasn't your best performance Britney. But I love you anyway.
Posted by The Sunday Morning Hangover at 10:57 PM 1 comment:

Bush Is an Ass Man

And so am I--especially when it comes to about 50 Aussies showing their Asses to protest Bush at APEC!This is where Bush referred to the summit as OPEC and called the Australian Army "Austrians". Like I said....

Posted by The Sunday Morning Hangover at 9:56 PM No comments:

Come To My Birthday Party! 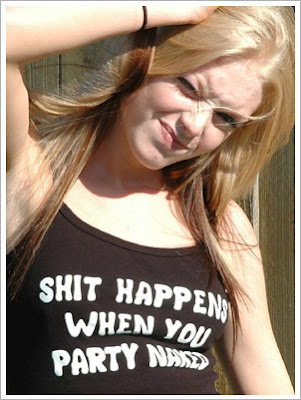 Party Naked Sunday Morning in the privacy of your own living room as Rev. Marc Time has his Birthday Party ON THE AIR!
Sing along, help cut the cake and open presents, and dance to my fave Party songs.The Party starts at 10 AM on KWVA Radio 88.1 Eugene OR
www.kwvaradio.org
Listen or Download this broadcast HERE
Posted by The Sunday Morning Hangover at 8:42 AM No comments: