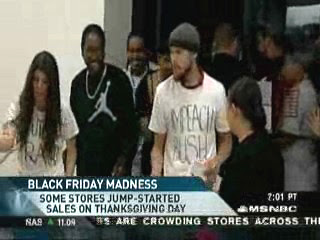 From My Fave Blog CROOKS AND LIARS :

By: Logan Murphy @ 3:28 PM - PST
"I was watching MSNBC this morning and during a segment on the Black Friday shopping frenzy and the throngs of people waiting in line to get into a New Jersey mall, when something caught my eye. I rewound the video and sure enough, the first two people through the door were wearing protest shirts — “Impeach Bush” and “Out Of Iraq”.
I don’t know who these brave souls are, but I thought I’d thank them for waiting in line to get the chance to make their statement and give them props for getting the holidays off to a great start and trying to spread some good will. We can only hope security didn’t tackle, tase or beat them…"

Give them the Congressional Medal of Honor or something! Did they get interviewed and is there footage of that?
KUDOS x 10000
Posted by The Sunday Morning Hangover at 8:54 PM No comments:


Thanks to Generation Exploitation.
Posted by The Sunday Morning Hangover at 7:15 PM No comments:

And 44 years later NO One really knows who murdered him. The one thing I do know it wasn't Lee Harvey Oswald;a cop found him on a lower floor drinking a Coke shortly after the last shot was fired.
And so today in 2007 the American people don't really know or care about the reasons for going to war in Iraq; all I know is that we were lied to about WMD.
Happy JFK day.
God Bless America.
Posted by The Sunday Morning Hangover at 6:34 PM No comments:

from Teenager Of The Year

Or maybe the interior
Of somewhere like Siberia
Yeah, the yak is back again

Like harvest moon o'er my head
Yes, it was
That billboard prose shining on me
And it shines because
It's been so long since my telstar
I hope it crashes in the sea

Like harvest moon o'er my head
Yes, it was
That billboard prose shining on me
And it shines because
It's been so long since my telstar
I hope it crashes in the sea
Posted by The Sunday Morning Hangover at 6:33 PM No comments:

House Votes To Impeach Cheney and NO ONE notices 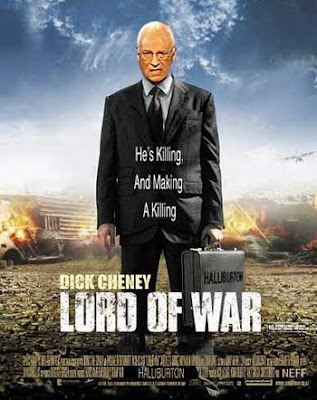 This article by Dave Lindorff here at http://www.buzzflash.com/articles/lindorff/036 sums up what happened this week. This was a very HISTORIC vote and NO ONE Covered it in the News! I told people at work, they didn't believe me-I told my good friend and he accused me of being on LSD!
If this vote took place and no one heard it, does it mean it didn't happen?:
Highlights from Dave's excellent summation:

You wouldn't know it if you just watch TV news or read the corporate press, but this past Tuesday, something remarkable happened. Despite the pig-headed opposition of the Democratic Party's top congressional leadership, a majority of the House, including three Republicans, voted to send Dennis Kucinich's long sidelined Cheney impeachment bill (H Res 333) to the Judiciary Committee for hearings.

For the Judiciary Committee to sit on it now and not schedule a hearing would be a gross travesty of parliamentary procedure and custom.

Indeed, some House members not associated with Kucinich's resolution are now openly calling for immediate hearings into Cheney's impeachable actions -- specifically lying the country into a war in Iraq and threatening war with Iran.

One indication of the change in the political climate in the House is the announcement by Rep. Robert Wexler (D-FL), a six-term congressman and a member of the House Judiciary Committee, that he will call for the Judiciary Committee to take up Kucinich's impeachment bill. This is significant because Wexler, no left-wing hothead, is not a co-signer of the Kucinich bill.

In an e-mail message to constituents, Wexler said: "I share your belief that Vice President Cheney must answer for his deceptive actions in office, particularly with regard to the preparations for the Iraq war and the revelation of the identity of covert agent Valerie Plame Wilson as part of political retribution against her husband."

"...Cheney and the Bush Administration have demonstrated a consistent pattern of abusing the law and misleading Congress and the American people. We see the consequences of these actions abroad in Iraq and at home through the violations of our civil liberties. The American people are served well with a legitimate and thorough impeachment inquiry. I will urge the Judiciary Committee to schedule impeachment hearings immediately and not let this issue languish as it has over the last six months. Only through hearings can we begin to correct the abuses of Dick Cheney and the Bush Administration; and if it is determined in these hearings that Vice President Cheney has committed High Crimes and Misdemeanors, he should be impeached and removed from office. It is time for Congress to expose the multitude of misdeeds of the Administration and I am hopeful that the Judiciary Committee will expeditiously begin an investigation of this matter."

"It is the duty of the Vice President to faithfully execute the laws of the United States of America and to defend the Constitution. There is growing evidence that the Executive Branch has ignored some of our laws and has attempted to bend the Constitution to its will. Members of both parties decided that this issue is too important to ignore. I voted with my Republican and Democratic colleagues to investigate the Vice President's actions in office."

She characterized the resolution sending the bill to the Judiciary Committee a "strongly bipartisan vote."

With these kinds of endorsements and calls for action, it is clear that Speaker Pelosi is looking increasingly pathetic and out of touch with her "impeachment is off the table" mantra, and also that Judiciary Chair John Conyers (D-MI), who seems to have been intimidated by the Speaker for the past year, but who earlier had been a leader in exposing the crimes of the Bush/Cheney Administration, is getting strong support for taking a bolder stand.

Stephen Cohen (D-TN), a member of the Judiciary Committee who is a co-sponsor of the Kucinich resolution, says he thinks that there will be an impeachment hearing in the committee.

The change in attitude toward impeachment among the rank and file, and the evident increasing willingness to buck the Speaker, reflects growing awareness of the groundswell of popular anger with the Bush Administration and the Democratic Congress over continued funding of the Iraq War, and over continued erosion of Constitutional government and civil liberties by an administration that wants unfettered executive power and by a Congress that is afraid to act.

This is before hearings and presentation of evidence have even begun!

As recently as a month ago, it didn't look like impeachment was in the cards; Now it's starting to look like Cheney's going to be put in the dock.

It may not be long before we start to see bills of impeachment filed against President Bush too.

The corporate media enjoy making fun of Rep. Kucinich, a height-challenged but dedicated progressive who has made a career of standing tall for his views. If his bill ends up leading to impeachment hearings against Cheney, Kucinich will end up having the last laugh. "
http://www.buzzflash.com/articles/lindorff/036
Posted by The Sunday Morning Hangover at 8:45 AM No comments: