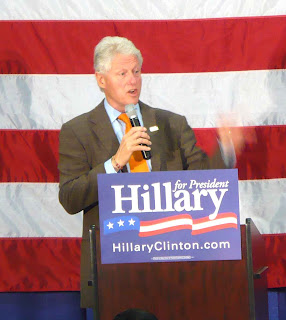 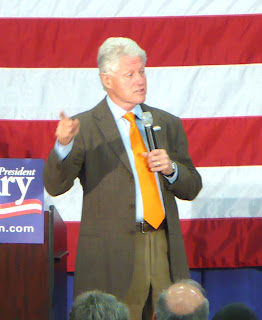 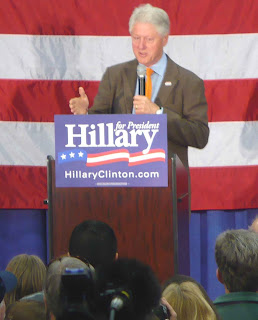 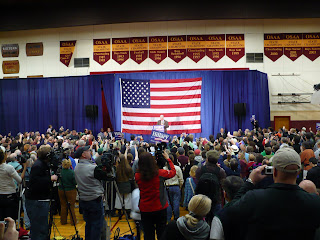 Yeah I actually went to the Hitl..-I mean Hillary Clinton Rally! We arrived at 8:45 on time to a packed(not!) Junction City High School crowd of 500 diehard Hillary fans and old school Democrats.Hillary wasn't there.
I brought my folded up plastic Obama lawn sign(hidden in a pocket) but my wife wouldn't let me unfurl it.
It WAS groovy seeing a former pres,and midway through his speech 3 cheerleaders walked into the event and giggled and squeeled.
Bill was up there telling everybody about all the cool stuff Hillary was up to and only dissed McCain once or twice.The word "outspent" was used a lot.
And he was talking about Obama. This coming from a political machine that was spending money for this campaign three years ago.
I'm still voting for Obama if you haven't guessed.
Posted by The Sunday Morning Hangover at 11:25 AM 1 comment:

These guys taught DEVO their dance moves. This Sunday at 11 AM on the Hangover a special tribute and musical history of the Spotnicks.

Posted by The Sunday Morning Hangover at 9:19 PM No comments:

McCain: A Question of Temperament
http://www.washingtonpost.com/wp-dyn/content/article/2008/04/19/AR2008041902224_pf.html
By Michael Leahy
Washington Post Staff Writer
Sunday, April 20, 2008;
John McCain cupped a fist and began pumping it, up and down, along the side of his body. It was a gesture familiar to a participant in the closed-door meeting of the Senate committee who hoped that it merely signaled, as it sometimes had in the past, McCain's mounting frustration with one of his colleagues.
But when McCain leaned toward Charles E. Grassley and slowly said, "My friend . . ." it seemed clear that ugliness was looming: While the plural "my friends" was usually a warm salutation from McCain, "my friend" was often a prelude to his most caustic attacks. Grassley, an Iowa Republican with a reputation as an unwavering legislator, calmly held his ground. McCain became angrier, his fist pumping even faster.
It was early 1992, and the occasion was an informal gathering of a select committee investigating lingering issues about Vietnam War prisoners and those missing in action, most notably whether any American servicemen were still being held by the Vietnamese. It is unclear precisely what issue set off McCain that day. But at some point, he mocked Grassley to his face and used a profanity to describe him. Grassley stood and, according to two participants at the meeting, told McCain, "I don't have to take this. I think you should apologize."
McCain refused and stood to face Grassley. "There was some shouting and shoving between them, but no punches," recalls a spectator, who said that Nebraska Democrat Bob Kerrey helped break up the altercation.
Grassley said recently that "it was a very long period of time" before he and McCain spoke to each other again, though he declined, through a spokesman, to discuss the specifics of the incident......

That temper has followed him throughout his life, McCain acknowledges. He recalls in his writings how, as a toddler, he sometimes held his breath and fainted during moments of fury.
In 2007, during a heated closed-door discussion with Senate colleagues about the contentious immigration issue, he angrily shouted a profanity at a fellow Republican, John Cornyn of Texas, an incident that quickly found its way into headlines.
Reports recently surfaced of Rep. Rick Renzi, an Arizona Republican, taking offense when McCain called him "boy" once too often during a 2006 meeting, a story that McCain aides confirm while playing down its importance. "Renzi flared and he was prickly," McCain strategist Mark Salter said. "But there were no punches thrown or anything.".......

McCain's temper first became an issue after an incident in 1989, during McCain's first term in the Senate.
The nomination of a beleaguered John Tower to become defense secretary was already in trouble when Sen. Richard C. Shelby of Alabama, a conservative Democrat who later became a Republican, helped doom it by voting against Tower. A furious McCain, believing that Shelby had reneged on a commitment of support, accosted him, got within an inch of his nose and screamed at him. News of the incident swiftly spread around the Capitol.....
In 1992, during a private meeting of Arizona officials over a federal land issue that affected the state, a furious McCain openly questioned Johnson's honesty. "Start a tape recorder -- it's best when you get a liar on tape," McCain said to others in the meeting, according to an account of their "nose-to-nose, testosterone-filled" argument that Johnson later provided to reporters.....
While in the course of a policy disagreement at a luncheon meeting of Republican senators, McCain reportedly insulted Pete V. Domenici of New Mexico with an earthy expletive. Domenici demanded an apology. "Okay, I'll apologize," McCain said, before referring to an infuriated Domenici with the same expletive......

A platform that had been adequate for taller candidates had not taken into account the needs of the 5-foot-9 McCain, who left the suite and went looking for a man in his early 20s named Robert Wexler, the head of Arizona's Young Republicans, which had helped make arrangements for the evening's celebration. Confronting Wexler in a hotel ballroom, McCain exploded, according to witnesses who included Jon Hinz, then executive director of the Arizona Republican Party. McCain jabbed an index finger in Wexler's chest.
"I told you we needed a stage," he screamed, according to Hinz. "You incompetent little [expletive]. When I tell you to do something, you do it."
Hinz recalls intervening, placing his 6-foot-6 frame between the senator-elect and the young volunteer. "John, this is not the time or place for this," Hinz remembers saying to McCain, who fumed that he hadn't been seen clearly by television viewers. Hinz recollects finally telling McCain: "John, look, I'll follow you out on stage myself next time. I'll make sure everywhere you go there is a milk crate for you to stand on. But this is enough."
McCain spun around on his heels and left. He did not talk to Hinz again for several years.........

In 1994, McCain tried to stop a primary challenge to the state's Republican governor, J. Fife Symington III, by telephoning his opponent, Barbara Barrett, the well-heeled spouse of a telecommunications executive, and warning of unspecified "consequences" should she reject his advice to drop out of the race. Barrett stayed in. At that year's state Republican convention, McCain confronted Sandra Dowling, the Maricopa County school superintendent and, according to witnesses, angrily accused her of helping to persuade Barrett to enter the race.
"You better get [Barrett] out or I'll destroy you," a witness claims that McCain shouted at her. Dowling responded that if McCain couldn't respect her right to support whomever she chose, that he "should get the hell out of the Senate." McCain shouted an obscenity at her, and Dowling howled one back.
Woods raced over, according to a witness, and pulled Dowling away. Woods said he has "no memory" of being involved, "though I heard something about an argument."
Posted by The Sunday Morning Hangover at 8:28 PM 2 comments:

I don't like so called journalists who use Sean Hannity talking points.
I don't like journalists that seek out "shills" to ask loaded questions about flag pins.
The most recent "debate" was a sham.
Shame on you ABC.
http://video.236.com/services/link/bcpid1507884404/bctid1509297835

Posted by The Sunday Morning Hangover at 9:44 AM No comments:

McCain Calls His Wife a "Trollop" and a "C_nt"


Three reporters from Arizona, on the condition of anonymity,mentioned an incident involving McCain's intemperateness. In his 1992 Senate bid, McCain was joined on the campaign trail by his wife, Cindy, as well as campaign aide Doug Cole and consultant Wes Gullett. At one point, Cindy playfully twirled McCain's hair and said, "You're getting a little thin up there." McCain's face reddened, and he responded, "At least I don't plaster on the makeup like a trollop, you cunt." McCain's excuse was that it had been a long day. If elected president of the United States, McCain would have many long days.
http://rawstory.com/news/2008/McCain_temper_boiled_over_in_92_0407.html
A senator explained that he had already committed to support George Bush," the former Senate staffer said. "McCain said ‘f— you' and never spoke to him again."
Another former senator who requested anonymity recalled an exchange at a Republican policy lunch. McCain turned on another senator who disagreed with him.
"McCain used the f-word," the former senator said. "McCain called the guy a ‘sh--head.' The senator demanded an apology. McCain stood up and said, ‘I apologize, but you're still a sh--head.' That was in front of 40 to 50 Republican senators. That sort of thing happened frequently."
"Why is Chelsea Clinton so ugly?" McCain said at a GOP fund-raiser in Washington. "Because Janet Reno is her father."
Robin Silver and Bob Witzeman, both medical doctors, met with McCain at his Phoenix office to discuss the endangered Mount Graham red squirrel. At the mention of the issue, McCain erupted. "He slammed his fists on his desk, scattering papers across the room," Silver said. "He jumped up and down, screaming obscenities at us for at least 10 minutes. He shook his fists as if he was going to slug us."
Democrat Paul Johnson, the former mayor of Phoenix, saw McCain's temper up close. "His volatility borders in the area of being unstable," Johnson has said. ""Before I let this guy put his finger on the button, I would have to give considerable pause." "I think he is mentally unstable and not fit to be president," former congressman LeBoutillier said
When running stories on Sen. George Allen's recent reference to a student of Indian descent as a "macaca," a genus of monkey, the media referred to inappropriate remarks by other political candidates but never mentioned McCain's 2000 statement, "I hate the gooks," a racial epithet for Asians. McCain later apologized and said he was referring to his wartime captors.
Posted by The Sunday Morning Hangover at 7:18 AM No comments:

Posted by The Sunday Morning Hangover at 9:35 PM No comments:

Neu!/Kraftwerk Drummer Klaus Dinger, R.I.P.
A founding father of krautrock has passed away. Klaus Dinger, who played drums for Kraftwerk and went on to co-found Neu!, died March 21, although the news of his death was not made public until today. A report from Neu! label Grönland cites the cause of death as heart failure. Dinger was 61, and would have turned 62 on March 24.

Dinger trademarked the steady, propulsive drumming style that came to define the motorik sound associated with krautrock. He drummed on Kraftwerk's 1970 self-titled debut before leaving the band, along with guitarist Michael Rother, to start Neu! Neu! released three seminal albums during the 70s, and had a noted influence on everyone from David Bowie to Sonic Youth to Stereolab.

After Neu! dissolved, Dinger achieved commercial success with La Düsseldorf, and in the 90s he formed a composite group of sorts called La! Neu?

René Renner, head of Grönland Records, called Dinger "an uncompromising musician, a challenging personality, [an] inspirational human being, and one of the most influential drummers" in a statement released today.

Rother eulogized Dinger on his website, writing, "Together with many friends of his music I will remember Klaus for his creativity as an artist and I will think about him with gratitude for his wonderful contributions to our project Neu!."
http://www.pitchforkmedia.com/page/news/49691-neukraftwerk-drummer-klaus-dinger-rip


Posted by The Sunday Morning Hangover at 6:44 AM No comments: