Why You Should Buy Citgo Gas 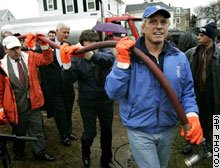 QUINCY, Massachusetts (AP) -- Thousands of low-income Massachusetts residents will receive discounted home heating oil this winter under an agreement signed Tuesday with Venezuela, whose government is a political adversary of the Bush administration.
Citgo Petroleum Corp., a subsidiary of Venezuela's state-owned oil company, will supply oil at 40 percent below market prices. It will be distributed by two nonprofit organizations, Citizens Energy Corp. and the Massachusetts Energy Consumers Alliance.
The agreement gives President Hugo Chavez's government standing as a provider of heating assistance to poor U.S. residents at a time when U.S. oil companies have been reluctant to do so and Congress has failed to expand aid in response to rising oil prices.
U.S. Rep. William Delahunt of Massachusetts, a Democrat, met with Chavez in August and helped broker the deal. He said his constituents' needs for heating assistance trump any political points the Chavez administration can score.
"This is a humanitarian gesture," Delahunt said, speaking after a news conference with Venezuelan officials and others outside the home of a constituent in Quincy who will receive heating aid.
Citgo is the Houston, Texas-based subsidiary of Venezuela's state-owned oil company and has about 13,500 independently owned U.S. gas stations.
U.S. officials accuse Chavez of endangering Venezuelan democracy by assuming ever greater powers.
During a short-lived 2002 coup against Chavez, the U.S. government promptly recognized the new leaders, who were soon driven out amid a popular uprising.
Copyright 2005 The Associated Press.
Posted by The Sunday Morning Hangover at 9:25 AM