The president swears an oath to preserve, protect and defend the The Constitution 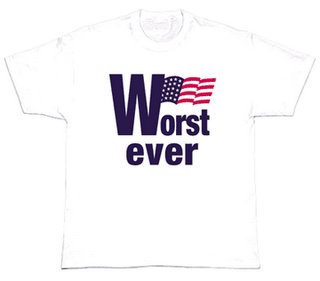 Last month, Republican Congressional leaders filed into the Oval Office to meet with President George W. Bush and talk about renewing the controversial USA Patriot Act.
GOP leaders told Bush that his hardcore push to renew the more onerous provisions of the act could further alienate conservatives still mad at the President from his botched attempt to nominate White House Counsel Harriet Miers to the Supreme Court.

“I don’t give a goddamn,” Bush retorted. “I’m the President and the Commander-in-Chief. Do it my way.”

“Mr. President,” one aide in the meeting said. “There is a valid case that the provisions in this law undermine the Constitution.”

“Stop throwing the Constitution in my face,” Bush screamed back. “It’s just a goddamned piece of paper!”

I’ve talked to three people present for the meeting that day and they all confirm that the President of the United States called the Constitution “a goddamned piece of paper.”

And, to the Bush Administration, the Constitution of the United States is little more than toilet paper stained from all the shit that this group of power-mad despots have duped on the freedoms that “goddamned piece of paper” used to guarantee.
Attorney General Alberto Gonzales, while still White House counsel, wrote that the “Constitution is an outdated document.”
Posted by The Sunday Morning Hangover at 8:15 PM